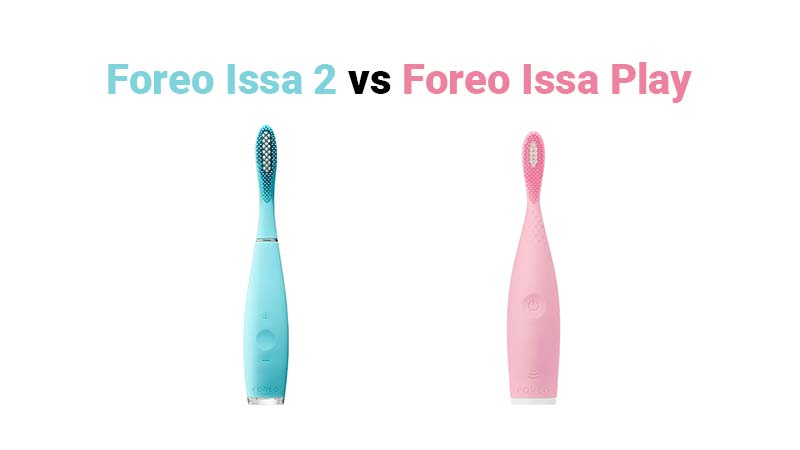 Combining sonic technology with a unique hybrid bristle design, the Issa 2 and Play are outstanding models in the Foreo Oral Care line-up. The differences come down to the number of functions and certain design elements, but the basic technology is shared between the two.

If you were like me as a kid then probably everybody told you about the importance of dental health. And while it's hard to care about that growing up, I fully agree with them nowadays. Dental hygiene is probably one of the most important things in our life. Our teeth need constant care to avoid any complications and most people would do anything to avoid going to the dentist.

So now that we all agree that we need to take care of our teeth, what's the first step? The first step is and will always be consistent and effective brushing habits. We need to brush our teeth at least 3 times a day and make the most out of each session with tried and true brushing partners. But once that's covered it becomes time to choose our trusty brush.

I like sonic toothbrushes, not only are they more thorough but the vibrations mean I don't have to be as firm when brushing my teeth. So with that in mind, I decided to take a look at two of Foreo's main entries in their toothbrush lineup: The premium Foreo Issa 2 and the entry-grade Foreo Issa Play. So stick with me as I go into detail to tell you which is the right device for you. 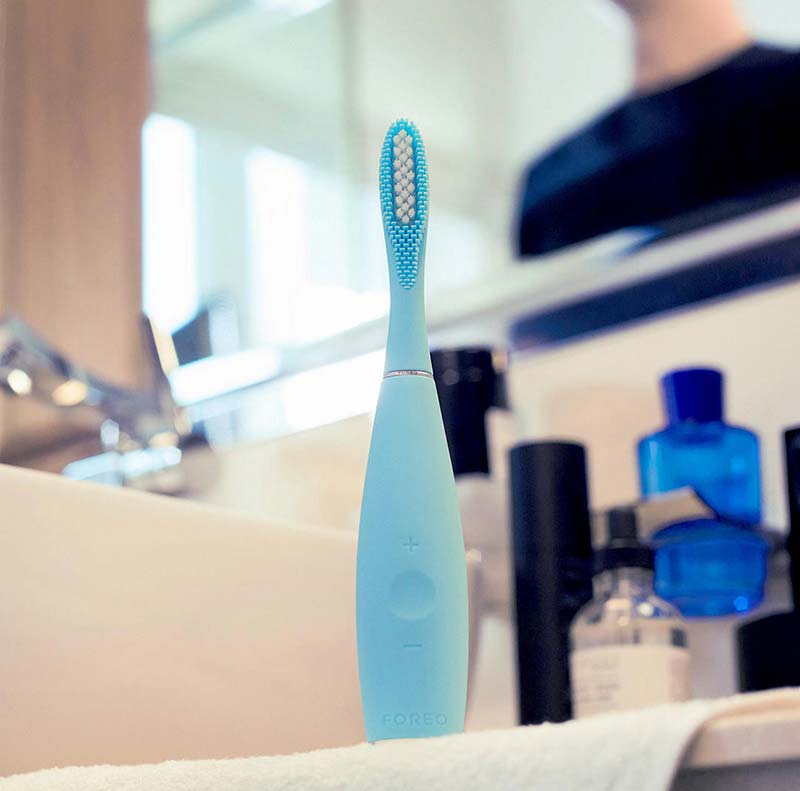 The Foreo Issa 2 is a fairly straightforward release, which I admit is something of a shock coming from the Foreo brand. But the moment you open the Issa all you'll find is your new brush, a USB cable charger, and a travel pouch. The pouch isn't anything to write home about, and I tend to prefer charging bases, but the package is functional and that's what matters.

After unlocking the Issa 2 by pressing the "+" and "-" buttons at the same time you are ready to use it. So what's so unique about the Issa 2? The first thing to notice are those two buttons. The Issa 2 has 16 intensity settings, which is a great feature when it comes to something as sensitive as our teeth. On the other hand, the manual doesn't specify the speed of each intensity, and it's not like these things have a standard across brands. So I can't help but wonder when I'm going too soft or too rough on my teeth.

On top of that, the Foreo Issa 2 claims to be able to last 365 days with a single charge, and this is kind of a layered claim. There's no denying that past Foreo products I've tried tend to have great battery life. But on the other hand, they turn off on their own, just like the Issa 2. So depending on how much you actually use it expect a long battery life, but not anything as extreme as an entire year.

Last but not least we are left with the head design, which is admittedly pretty genius. The Issa 2 combines traditional bristles with silicone ones to cover both your teeth and gums. The hard bristles are perfect for teeth, and the silicone ones did clean my gums without any irritation. The best part is that the distribution is more or less perfect. And after getting used to it my mouth felt much fresher as a whole. 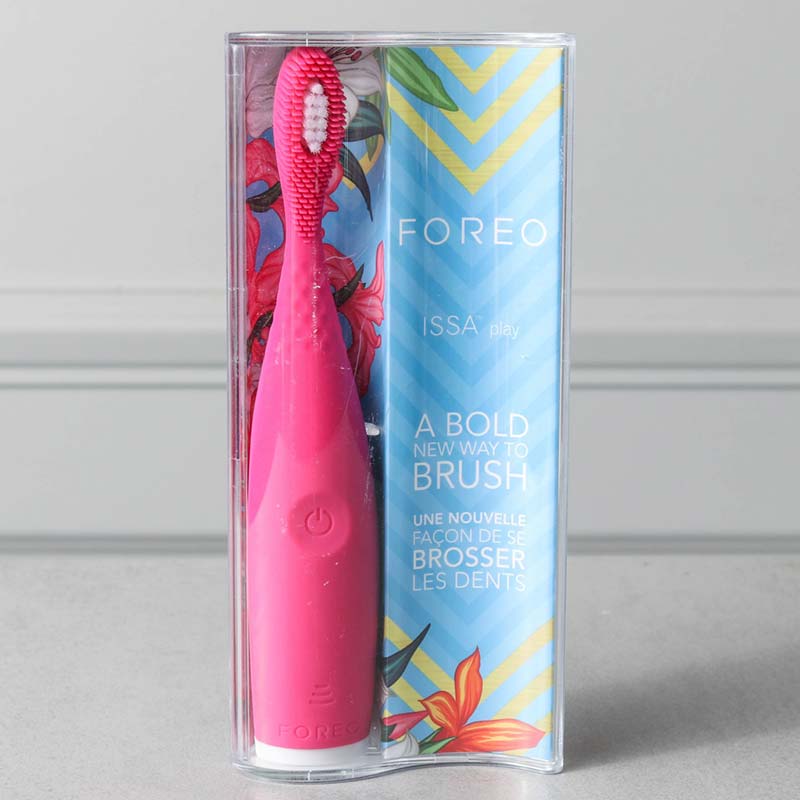 On the other side of this Foreo Issa Play vs Issa 2 comparison, we have the underdog in the form of the Play. The Issa Play is an interesting little machine, however, and I think it's way more than just a budget Issa when you get down to it.

Once you open your new Issa Play you are met with... Nothing but the brush itself. This is a battery-operated brush, and there are no freebies either. Not a big deal per se, but it's something to note. The Play as a whole is smaller and more streamlined than its larger cousin, with a shorter handle and head, and no intensity settings to speak of.

There is however one feature that the Play brings to the table and that comes in the form of its brushing indicators. There are tiny smiling faces that show whether it's been used or not. It's mostly a feature for parental control, but it's harmless. If your kid is old enough they can trick it, but there's something sweet about the idea itself.

Once I got down to brushing itself I had some minor struggles. The head design follows the same hybrid bristle idea, but the distribution isn't the same. Overall I felt there was too much gum area and not enough for your teeth. There's a learning curve here compared to the Issa 2. And while I did get the same result ultimately, I had to be way more conscious of my brushing patterns. Ultimately the Play feels like it came to a point where the head design just wasn't perfected.

It's always an interesting experience to review two products of the same company. The fine details matter a lot, and I think this makes the Pros and Cons section all the more important. So let's take some time to evaluate these two brushes and see just how different they are despite the shared Issa brand.

While the Issa 2 is winning in the pros category at the end of the day I don't feel the conclusion is as straightforward. Once we get down to the basics both the Issa 2 and Play work very well. They share the same basic design for the heads which means your gums and teeth will be very appreciative regardless of which model you pick.

The Play loses when it comes to intensity settings and the head design. However not all of you will need to control the intensity, and the head design does work. It's a shame that the Play doesn't use the same distribution as the Issa 2, but if you are conscious about your brushing you will see the same results.

So when I add the price tags to the above considerations I have to admit there isn't one superior option per se. The Issa 2 generally works better, but it's 3 times the price so this should come as no surprise. In general, I think it comes down to a simple fact. The head design in Foreo brushes is brilliant and well worth trying out. If you have confidence in the Foreo brand then go for the Issa 2 directly. But if you want to know the brand first then the Play is the way to go.

Rose Desrosiers
4 months ago  5 min
Want to
Feel Better
Amazing
During Your
Period?

Why are we here? These devices look nothing alike, so they should be completely different?

Let's see what makes Foreo Bear and Foreo UFO 2 special and different from each other, and which one is perfect for you.

Today I'll be taking a look at the Foreo Bear and the Nu Skin Facial Spa. These two microcurrent devices have large brand names behind them and are sold at very similar prices to boot.

Designed as luxury toothbrushes both the Foreo Issa 2 and Quip Smart Electric Toothbrush share similar design ideologies. While the Issa 2 has more functions integrated, you can expect similar results from these two devices.

There are lots of menstrual cup quizzes on the internet. We compared them all to see how they stack up against each other.

Do I need both of those electric toothbrushes in my collection? Yes. Do you? Let's compare them and see which one works for you.

Both Foreo Luna 3 and Luna mini 3 benefit from the same type of technology and materials. But which one of the two to pick; the full-sized or the mini one? Are there other differences besides the size?

In this article, we are going to review two of the best toothbrushes in the market and give you a verdict so you can make an informed decision.

Today we'll focus on two specific devices, the Foreo Bear and the Ziip GX. Both of these are microcurrent devices designed to lift and rejuvenate our skin.

The QYKSonic Zoe promises to cleanse, massage, and apply your skincare products. Could it be the one to knock off Luna 3 off its pedestal, or is it just a pale imitation? Let's check it out.

It's every teenager's worst nightmare: acne. Today, we'll review two of the leading brands and tell you which one, the Foreo Espada vs. LightStim, is the product to give you your skin back.

Both of these handheld devices offer a spa cleansing right at home, but how well do they hold up? That's what I'll explain to you in this Foreo vs PMD comparison.

Accompany me as I explain in detail how sonic cleansing works through my experiences with the Foreo Luna 3 and the meejee.

Rose Desrosiers Foreo Iris: Is It Worth It? Premium Beauty

Foreo Iris is a fantastic eye massager. It fits perfectly into all of the facial contours and will in no way harm the delicate skin around the eyes.

As the tools that lead the pack in keeping ladies both worry and hair-free, let’s comb down and take a more comparative look as we pit the Tria Hair Removal Laser 4X vs the Philips Lumea IPL 9000 Series.

Our face is the first thing people see of us, so it makes sense that we all want it to look spotless. But I wanted to find a more consistent alternative that had real and undeniable results.

Learn everything about your cervix. Find out which menstrual cups are the best match for you if you have a low cervix in this in-depth article.

Introducing the vFit, the little piece of ingenuity to help us women who crave a more intimate, pleasurable, and comfortable time in the bedroom.

One in every three women will experience pelvic floor issues within their lifetime. Keep pelvic floor muscles fit with Intimina KegelSmart.

Check out these awesome methods on how to safely sterilize your cup. You'll love method number 6!

Wondering how to remove period stains from your menstrual cup? You’re not alone.

Looking for a collapsible menstrual cup that folds flat and fits in your pocket, backpack, or purse? Then you've come to the right place!