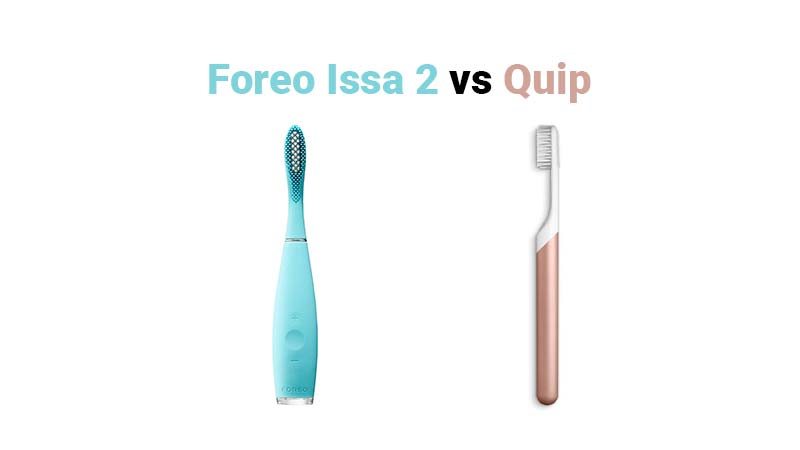 Designed as luxury toothbrushes both the Foreo Issa 2 and Quip Smart Electric Toothbrush share similar design ideologies. While the Issa 2 has more functions integrated, you can expect similar results from these two devices.

If there's one aspect of our healthcare that seems to be a universal constant that has to be our teeth. Whether you are a woman, a man, or a kid your teeth will always matter and will always need care. I've always liked to believe that my oral hygiene is up to par, but there's no denying that there are a lot of angles to consider. People argue all the time about what's the right way to brush your teeth, the right toothpaste to use, and of course most important of all, which is the one brush to rule them all.

Today I'll be focusing on that last aspect. I'll show you two unique electric toothbrushes that have a lot of reputation and support online: The Foreo Issa 2 and the Quip Smart Electric Toothbrush. But beyond the Foreo Issa 2 vs Quip comparison, I also want to teach you some secrets to the world of oral hygiene, so you can finally have the perfect teeth you've dreamed of. 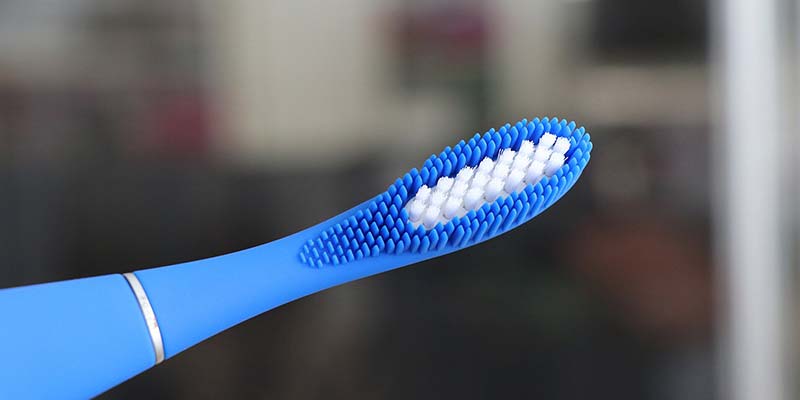 The Foreo Issa 2 was something of a surprise to me. If you've seen past reviews of Foreo products then you probably are aware of their extensive skincare line, and the fact that they rely very heavily on apps. The Issa 2 on the other hand is focused on oral hygiene and works perfectly well without an app.

Despite the price tag of $169 the Foreo Issa 2 comes with the bare essentials. You get the brush itself, a USB charge cable, and a travel pouch. There are no alternate head attachments, no charging base, no tricks or whistles. So the feeling on my teeth is the most important aspect to consider.

The Issa 2 has 16 intensities that you can easily regulate with the "+" and "-" buttons, but beyond that, it works like any other toothbrush in the market. Thankfully once you start brushing you do start to notice how smart its design is. The head of the brush uses both traditional bristles on the middle and much softer silicone ones on the edges. This means you can get solid bristles for your teeth and a soft sensation on your gums at the same time. It's a simple trick, but it is clever and I love how it feels on my mouth. 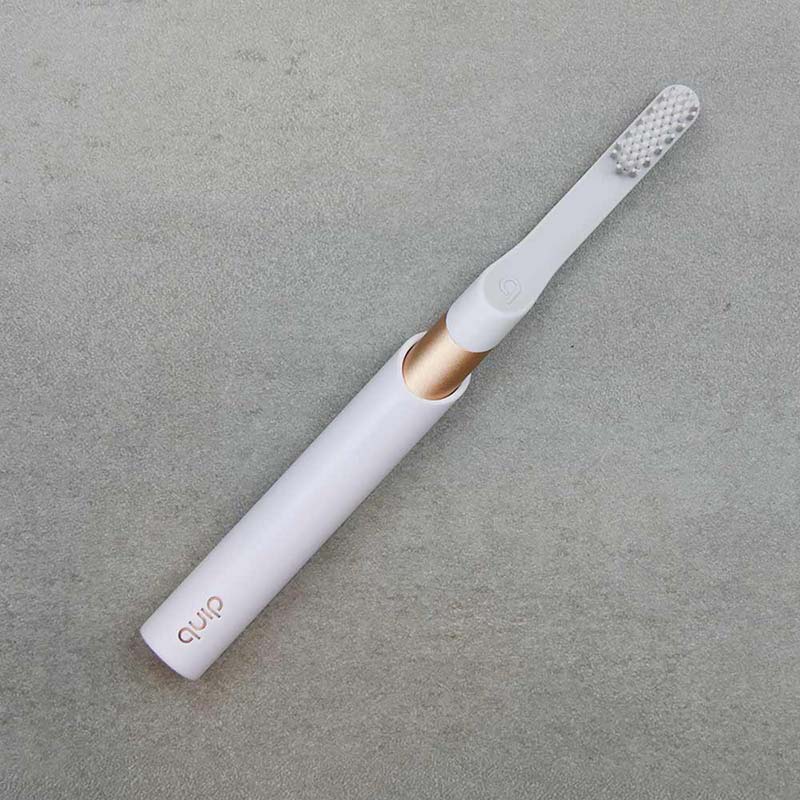 If the Foreo Issa 2 was straightforward then the Quip Smart Electric Toothbrush is downright minimalistic. Once you open the $65 package you'll come across your new brush, a small tube base and that's it. In what has to be the most unique design choice with this brush there isn't even a charger. Quip offers you battery and head replacements for basically $5 a month, but thankfully that's not the only option. The Quip Brush comes apart rather easily and it thankfully uses regular batteries to work.

The key differences with the Issa are that there are no intensity settings and that the Quip comes with an app. The App however is way less intrusive than any of Foreo's attempts on the subject. You don't need the app to unlock or turn on your brush at all. Rather the app is more of short tutorials and tracker for your brushing. Honestly, it likely won't add much unless you use the brush for kids, but it's way better than a lot of alternatives in the market.

As for the brushing experience itself, it is really good. The vibrations are firm and consistent without being painful, and since the brush is so minimalistic the grip is just perfect. On top of that, the Quip has a very similar design to the Foreo when it comes to the bristles so you get the same level of gum comfort. It's honestly a great brush all around.

What Makes a Good Brush?

So here's the thing, I'm not a dental expert, but I've talked to a fair amount. Something that I like to ask all dentists I come across is what brush do they recommend. After all, if anybody knows what makes a good brush is a dentist. However, the common answer might shock you.

Most dentists I've talked to aren't particularly concerned about the brand or model of brush you pick. Of course, certain criteria are consistent across most recommendations. Bristles should be firm to provide better cleaning. And cheaper brands don't offer as much quality. But the general response is that the features of a brush don't matter anywhere near as much as your technique.

Turns out a lot of us aren't as great at brushing as we'd like to believe. So someone with a high-end brush but poor technique and someone with amazing technique and a $5 brush will experience similar results. This doesn't mean there aren't better brushes in the market. But your number one concern should be to get the proper technique down.

I think most of you probably have a good grasp of what my conclusion will be, but as usual, let's go over the pros and cons before making any final calls.

Ultimately the Foreo Issa 2 vs Quip comparison is much more straightforward than I assumed it would be. Both devices have similar designs when it comes to the head which is the most important part. Firm bristles with silicone attachments are the perfect combo, and both devices ace it. However as we saw what's most important when it comes to brushing is your technique, so no brush in the market will make up for poor or sloppy habits.

So with that in mind, there's little reason not to suggest the Quip over the Issa 2. Their heads are almost the same so they should be equivalent when it comes to brushing. And both the Quip and its replacement heads are way more affordable than Foreo's selection. A brush doesn't make a smile, but it's still important to have a good tool in your hands. So with that in mind, the Quip Smart Brush has my seal of approval.

Rose Desrosiers
5 months ago  5 min
Want to
Feel Better
Amazing
During Your
Period?

Do I need both of those electric toothbrushes in my collection? Yes. Do you? Let's compare them and see which one works for you.

Both Foreo Luna 3 and Luna mini 3 benefit from the same type of technology and materials. But which one of the two to pick; the full-sized or the mini one? Are there other differences besides the size?

Today we'll focus on two specific devices, the Foreo Bear and the Ziip GX. Both of these are microcurrent devices designed to lift and rejuvenate our skin.

In this article, we are going to review two of the best toothbrushes in the market and give you a verdict so you can make an informed decision.

The QYKSonic Zoe promises to cleanse, massage, and apply your skincare products. Could it be the one to knock off Luna 3 off its pedestal, or is it just a pale imitation? Let's check it out.

It's every teenager's worst nightmare: acne. Today, we'll review two of the leading brands and tell you which one, the Foreo Espada vs. LightStim, is the product to give you your skin back.

Both of these handheld devices offer a spa cleansing right at home, but how well do they hold up? That's what I'll explain to you in this Foreo vs PMD comparison.

Accompany me as I explain in detail how sonic cleansing works through my experiences with the Foreo Luna 3 and the meejee.

Rose Desrosiers Foreo Iris: Is It Worth It? Premium Beauty

Foreo Iris is a fantastic eye massager. It fits perfectly into all of the facial contours and will in no way harm the delicate skin around the eyes.