Can you sterilize a menstrual cup in a microwave, and is it safe? Or should you just boil it in a pot on a stove? In this post, I list six different methods on how to safely disinfect a menstrual cup.

Which is the best method for sterilizing a menstrual cup?

In my opinion, the best way for sterilizing a menstrual cup is by boiling it using a pan or a pot on a stove in a kitchen.

Because it's convenient, environmental-friendly, and it saves you a few dollars compared to other sterilization methods.

Actually, I've been thinking about this question for a while now, so I did a little research.

What I discovered were six excellent methods for sterilizing a menstrual cup (you'll love method number 6 🤯).

Can you sterilize a menstrual cup in a microwave?

The answer is it depends.

Some menstrual cup manufacturers say yes, others, for example, Lunette, DivaCup, and Mooncup say no.

Always follow the instructions that came with your menstrual cup before thinking about microwaving it!

When in doubt, boil your cup in a pot on a stove.

Is it safe to boil a menstrual cup in a microwave?

If done properly then yes.

If you freestyle then things could go wrong.

There are always risks involved when dealing with hot contents so you need to be extra careful and again follow instructions of whatever method that you are using for sanitizing your cup so that you don't hurt yourself or damage your cup.

Why do you need to sanitize your menstrual cup?

This prevents you from getting an infection and keeps your menstrual cup in perfect condition.

There are several techniques for sterilizing a cup.

Here are the ones that I could find, and that I think are the most common:

1. Boiling a menstrual cup in a pan or a pot on a stove 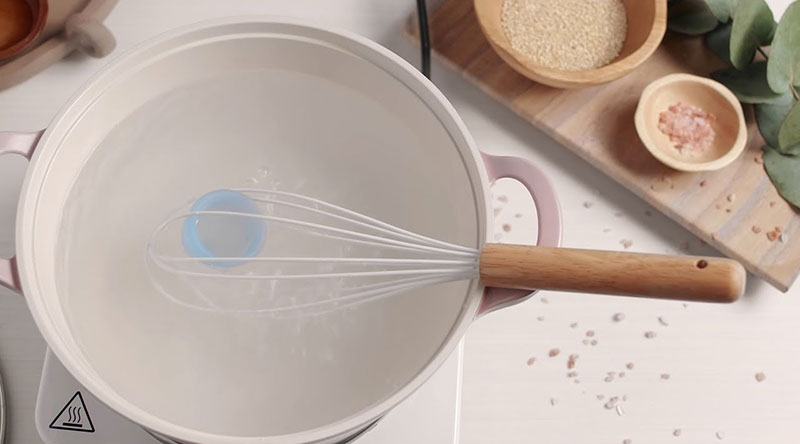 This is what most menstrual cup brands will tell you to do.

Both before you use your cup for the first time, after your period, or before your next period, depending on what you prefer.

As long as you boil it in between cycles.

I’ve seen quite a lot of instruction manuals on how to boil a menstrual cup and I have to say that most could do a better job at explaining the process better.

But as a first-time user, it's difficult to completely understand what they mean by that.

For example, here are some questions that I’ve had flying through my head the first time I had to boil my cup:

And I could go on and on.

I guess this list is one of the reasons brands such as Lunette, DivaCup, and Mooncup have decided to simply not support microwaving menstrual cups.

I imagine that could lead to unhappy customers, extra unwanted operational costs, etc.

I think however that in the future these companies will change their opinion as over time more and more people will be using cups and boiling a cup will become second nature in people's monthly menstrual cycle routine.

2. Boiling a menstrual cup in a sterilizing cup in a microwave 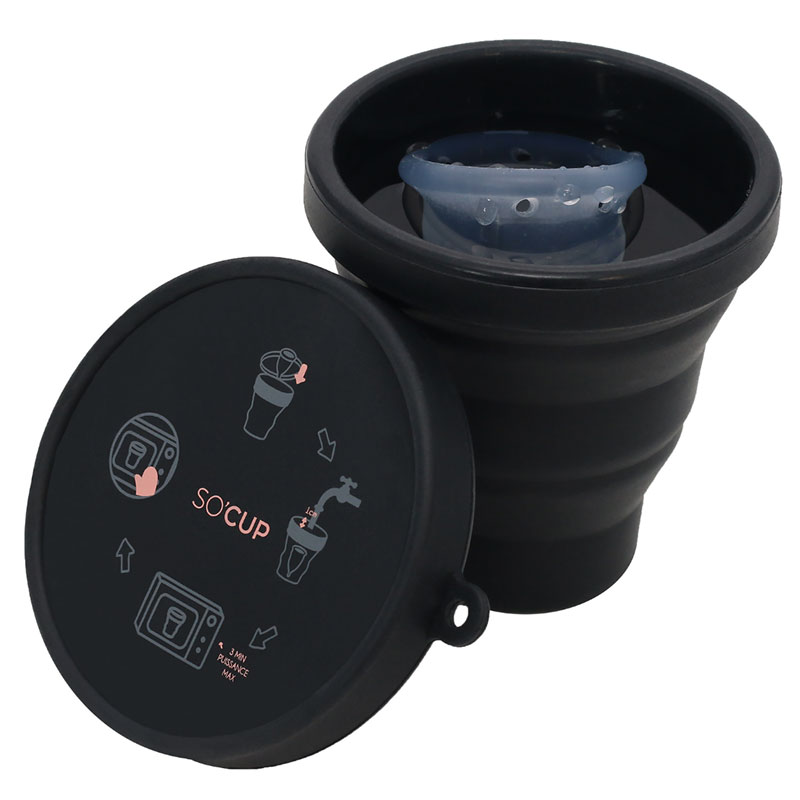 One such product is a sterilizing cup for menstrual cups.

You might have seen one at some online retail store or on a menstrual cup brand website.

They are often shaped so that it will fit a cone-shaped or v-shaped cup.

They come with a lid and some models are foldable.

If you’re a beginner I would definitely recommend this product.

Compared to just boiling your cup in a pot there are way fewer questions concerning how you’re supposed to sterilize your cup using this method.

And the things you need to think about before and after sterilization.

One thing that I would like to point out however is that the material that the sterilizer cup is made of should be of importance to you.

You should keep in mind that this product, like any other product, requires lots of resources, such as energy, raw materials, transportation, etc., during its lifecycle.

And also, pay close attention to manufacturing details such as where the sterilizing cup is manufactured and if it’s the real deal.

You don’t want to end up with a cheap counterfeit product that could be both bad for your cup, you or the environment, or a combination of these.

In other words, always do your homework before purchasing such a product.

Pretty much the same way as you would when choosing a menstrual cup. 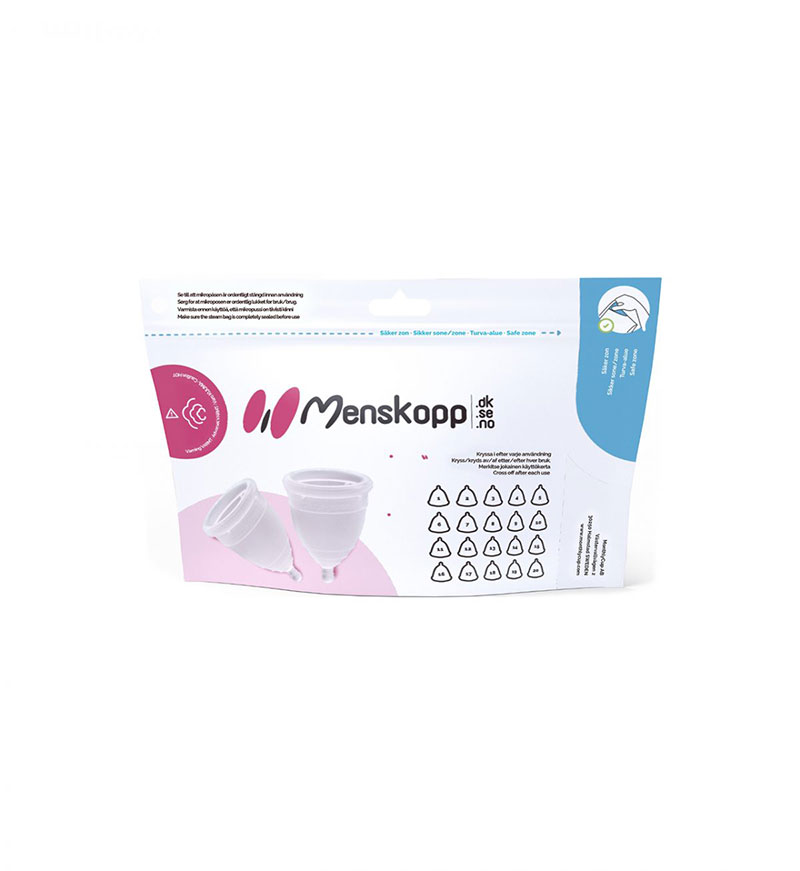 Another option that you have is to use a specially designed reusable microwave steam sterilizer bag for boiling and sterilizing your cup.

I have actually only seen one menstrual cup brand offering this type of product and it’s a company located in Sweden called MonthlyCup.

"Sorry, but we cannot ship to this destination at the moment."

My guess is that they’re only targeting the U.S. and maybe some other larger markets evaluating demand before offering the product globally.

Either way, I think it’s an interesting product with great potential and it lowers the barrier even more for wanting-to-try menstrual cup users contemplating how to use and how to clean a cup. 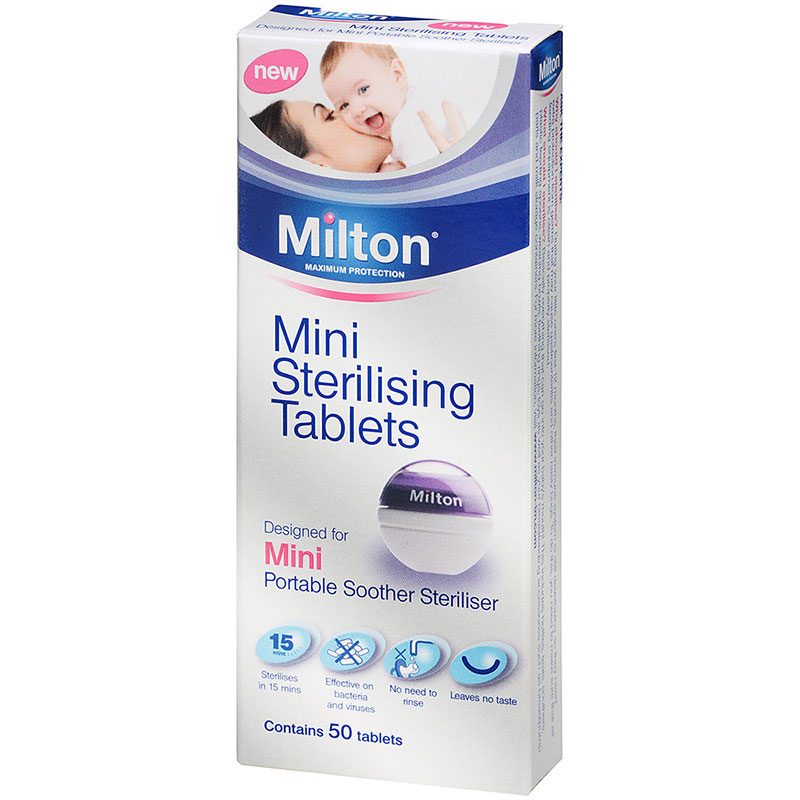 I don’t know much about these but this product definitely got my attention when I first heard about it.

But they can also be used for sterilizing menstrual cups.

A tablet can remove bacteria, viruses, and fungi.

A process that only takes a couple of minutes.

Apparently, these tablets have been used in hospitals for many years.

And to me, this last bit of information is very important because it signals that it’s a product that has been tried and tested and will most likely not cause me any harm. 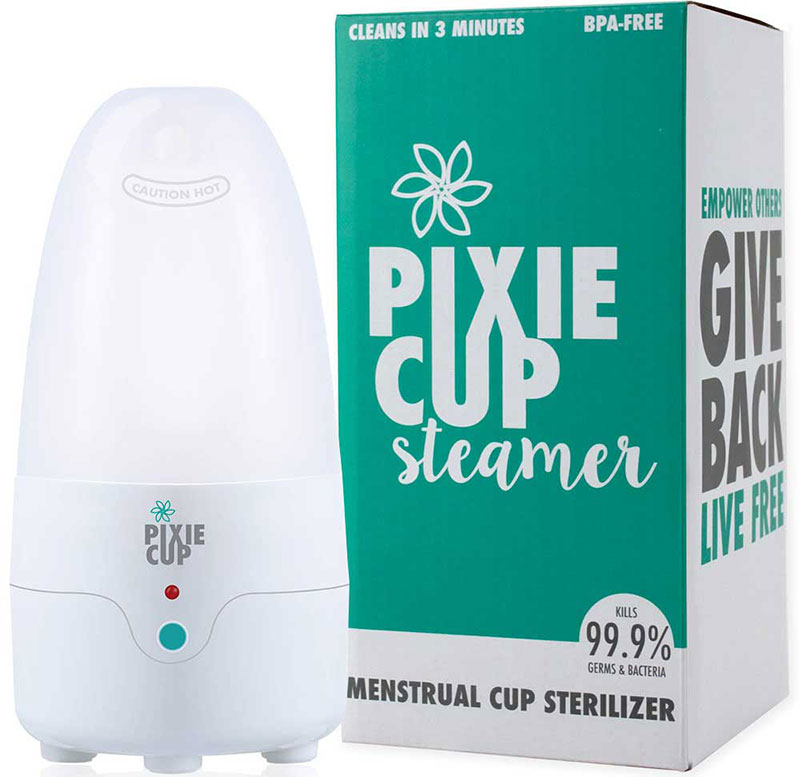 The rest I've seen on Amazon.

I haven't checked them out in detail, but they are there.

What I like about these cup steamers is that I don't have to worry about a pot or some miscellaneous kitchen tool damaging my cup.

I just place my cup on the steamer, add a small amount of water, close the lid, push a button, wait for a couple of minutes, and voilà!

And the downside would be yet another home appliance eventually ending up in our landfills. 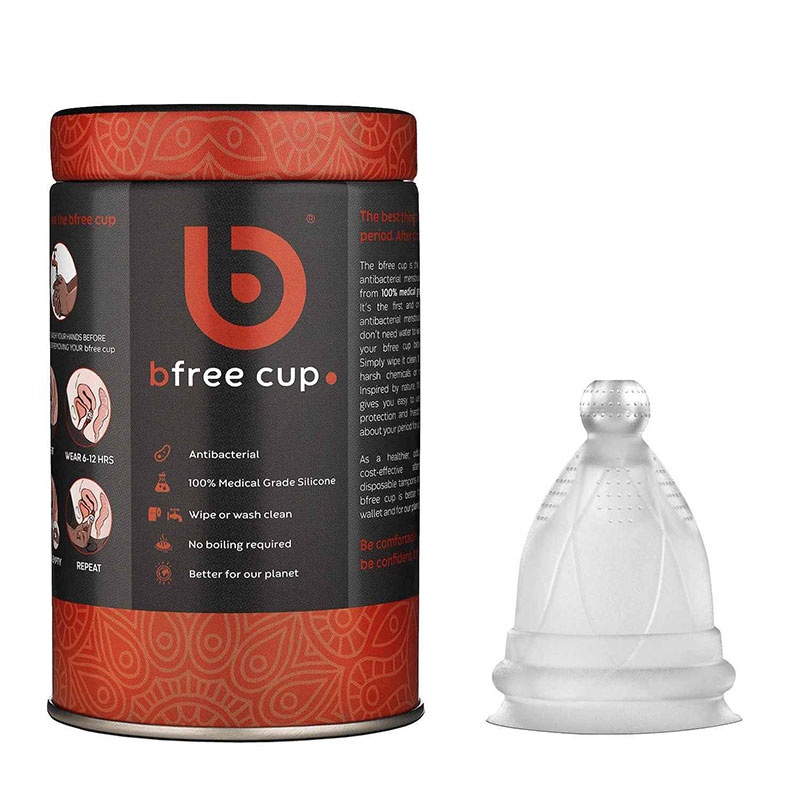 Equipped with a one-of-a-kind antibacterial technology you can now use a menstrual cup without ever having to boil it.

Heck, you don’t even need water.

How cool is that?

If you want to learn more check out bfree's Kickstart campaign and, or website.

The best method for sterilizing a menstrual cup

Most people don’t have the luxury of being able to buy a sterilizing cup, microwave steam sterilizer bags, sterilizing tablets, or a steamer.

And most people already own a pot or a pan that they have in their kitchen.

So, in my opinion, your best option is to use a pan or a pot on your stove in your kitchen for sterilizing your cup.

Not only is it convenient, but it's environmental-friendly, and it saves you a few dollars.

Found your favorite sterilizing method but haven’t found your Goldilocks cup yet? 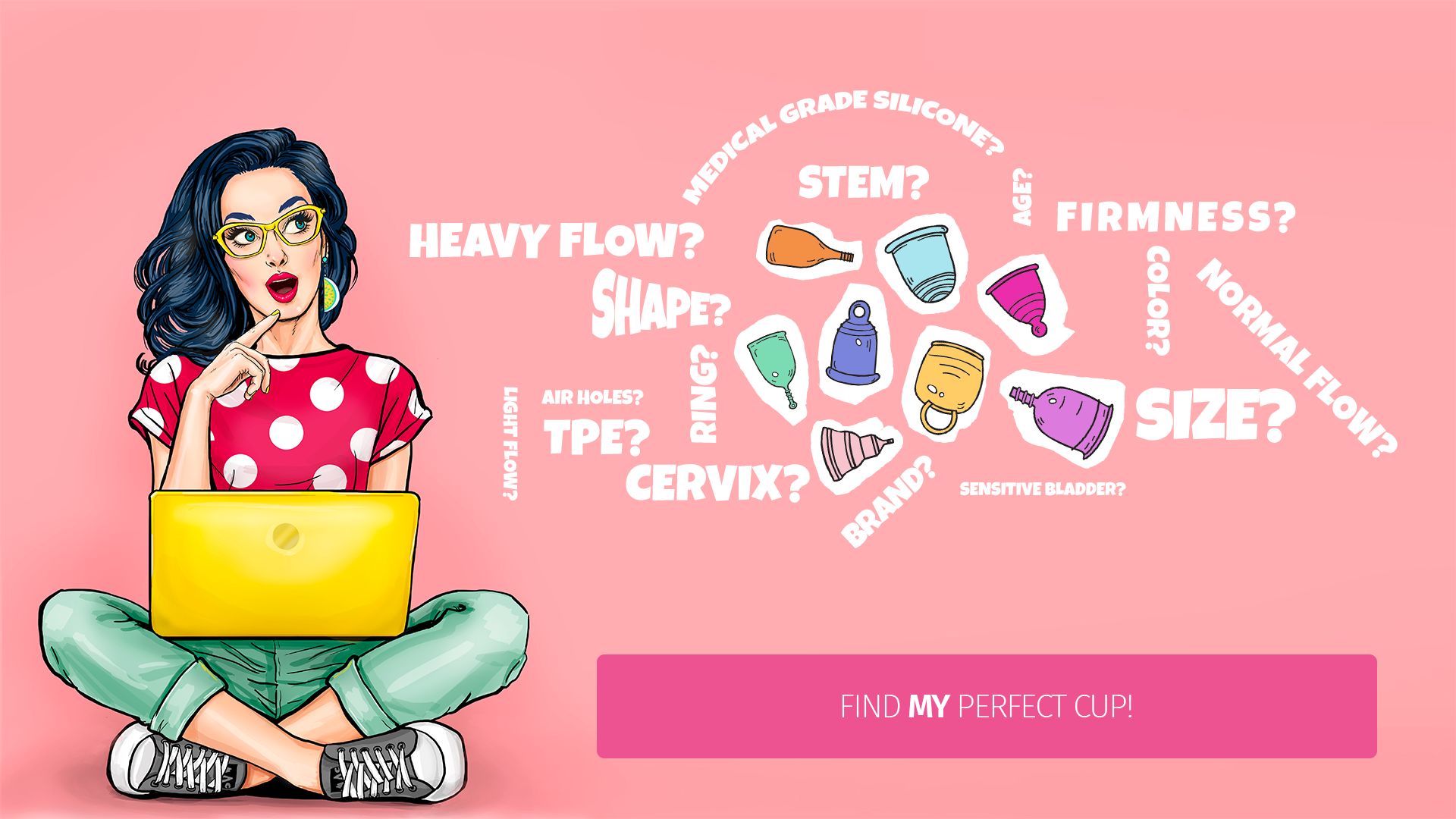 Then give CUP-FIGURATOR™ Menstrual Cup Finder a try.

Just answer 10 questions about your lifestyle and menstruation and then let it work its magic.

You'll then be able to compare menstrual cups, read reviews, learn more about each individual cup and pick your favorite one.

And if you would rather do the heavy-lifting yourself you're always welcome to use menstrualcup.eco Search™.

menstrualcup.eco staff Image & Video: The Ultimate Collection of Tips and Links on How to Use a Menstrual Cup Image & Video

How do you put in a menstrual cup? How do you take it out? Find out here - visually!

There are quite a few menstrual cups to choose from if you're a teen, but which one is the right one for you? Find out in this post!

Wondering how to remove period stains from your menstrual cup? You’re not alone.