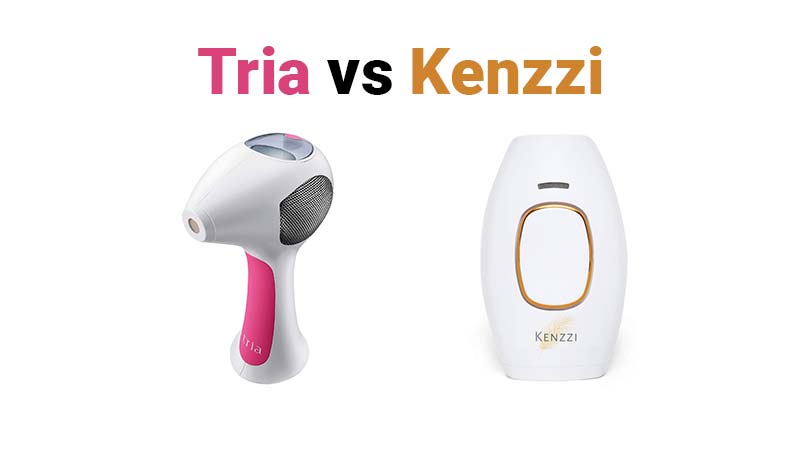 The difference between the Tria vs Kenzzi lies in the technology behind them. The Tria Hair Removal Laser 4X is a laser-operated treatment that works on a wide variety of skin colors but focuses on dark hairs. Meanwhile, the Kenzzi Hair Removal Handset uses IPL technology to target more hair colors, but it's not designed to work on darker skins.

If you are like me you've probably spent way too much time trying out hair removal products. Going to the salon every week for hair removal isn't always possible. And if I hunt for hairs on my own there'll always be one or two that I don't notice and will drive me mad.

Hair removal isn't fun, and sometimes cream and tweezers just don't cut it. That's why I started looking into more professional hair removal alternatives that could be used at home. Can you imagine it? Getting that perfect salon look right at home? Of course, while it sounds wonderful looking into it led me to realize that there are far more products than I imagined, but that's what this post is for.

Today I'll go over two of the most interesting hair removal products I've found and had the chance to try out. On one hand, we have the Tria Hair Removal Laser 4X, a little "laser gun" of your own that provides salon treatment in a single handheld package. On the other, we have the Kenzzi Hair Removal Handset, a compact device that instead relies on IPL technology to get rid of hairs. So sit back and keep reading; by the time you are done, you will know perfectly which one is the right device for you.

What Is the Tria Hair Removal Laser 4X? 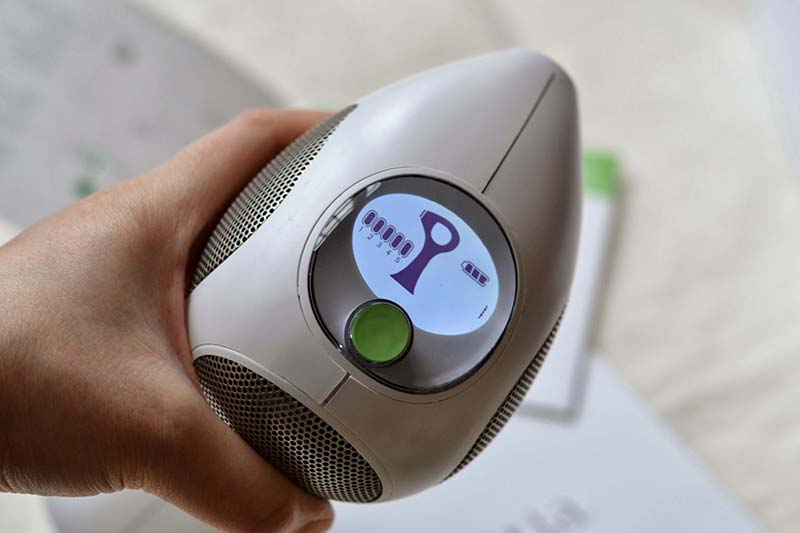 As futuristic as it might sound, the Tria is in short a laser gun. It works just like any other laser removal treatment you've used in the past, if anything the Tria is just smaller and more portable. But if you haven't used a laser before I'll go over it in just a few sentences. Lasers work by disabling the melanin at the root of your hair follicles. So basically lasers target the root of your hairs, and while you will feel some heat they won't burn you or anything like that.

Now that we are on the same book I just need to focus on what makes the Tria Laser unique. The Tria is a home alternative to the larger and bulkier hair removal lasers, it's both FDA approved and dermatologist recommended, so it has some pretty solid backing behind it. And once you have it on your hands you will see that it's a pretty powerful little laser.

The Tria Laser is gun-shaped and has a small "nozzle", so covering all your skin might take some time. But the product is as professional as it can be from the very first moment. When you first use it it'll ask to do a match of your skin, just so you can rest assured it's safe. And once it's going you'll have access to all the different energy levels. You'll probably only use one, but being able to choose the most comfortable is a big deal.

Once you have every setting down... Just use it as you would use any shaving tool. Keep it on and apply it all over your skin, you might be at it for a while, but it definitely works.

What Is the Kenzzi Hair Removal Handset? 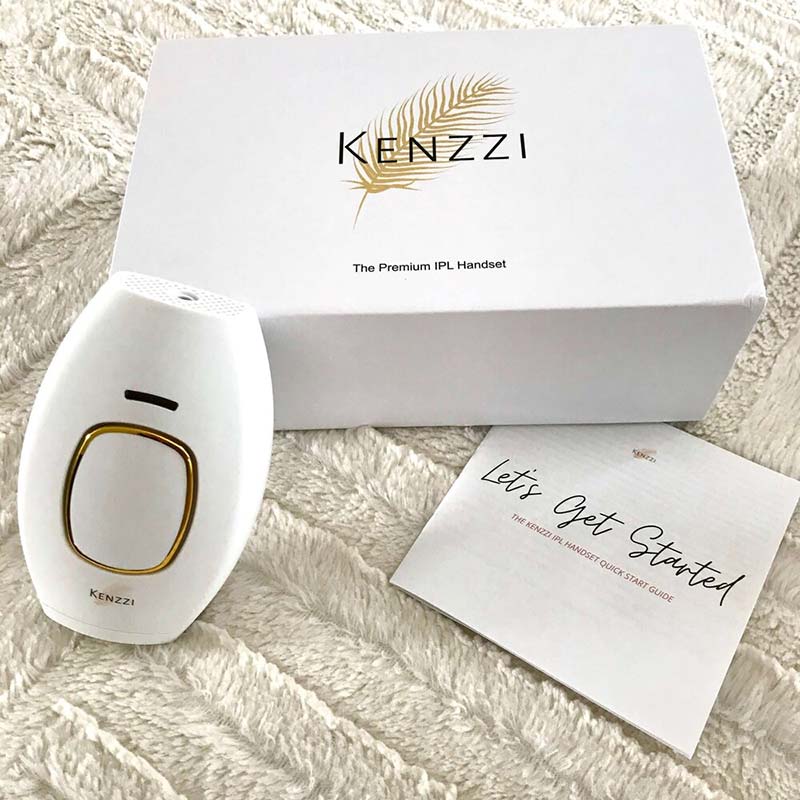 Unlike the Tria, the Kenzzi Hair Removal Handset is not a laser product, instead, it uses what professionals call IPL or Intense Pulsed Light. What's the difference? I'll go over it later in more detail, but in most cases, you won't notice that big of a difference. Just like with lasers IPL products rely on direct contact with the skin and use light for it. So you will use the Tria and Kenzzi the same way.

That said if there's one immediate difference that comes with the switch to IPL is the cost. The Kenzzi is half the price of the Tria Laser, and this is a huge factor to consider. Especially since for a lot of people, they will operate almost identically.

The Kenzzi is just as straightforward to operate as the Tria. Just hold it over the skin and press to start the treatment. There aren't any settings to consider so you just need to open it and go. But the results are still undeniable and regular use does reduce hair by a lot. The Kenzzi site says that it will last up to 10 years and while I definitely haven't used it that long, it's been a very reliable and sturdy little machine so far.

Choosing between the Tria vs Kenzzi comes down to what is better for you between laser and IPL. Both of these machines are some of the best picks in their categories, so how well they'll work for you largely relies on whether you prefer a laser machine or an IPL one.

When it comes to using the machines the experience will largely be the same, so what's the actual difference? Besides the inner mechanics, it comes down to what skin and hair colors are better suited for each one, and the actual sensation.

As I mentioned before lasers do feel warm. The Tria isn't meant to harm you, but some people do have sensitive skins. Laser tends to sting when first touching the skin, and while it won't leave marks it can be annoying to get stung so many times. IPL on the other hand is far less notorious. Some people have mentioned mild discomfort, but compared to the Tria I really didn't feel anything. So when it comes to immediate sensations IPL wins by a landslide.

On the other hand IPL not only is picky when it comes to skin colors, but it can also be dangerous in some cases. IPL technology isn't recommended for dark skin colors since it can cause irritation and spots. And of course, this applies to the Kenzzi too, which means a huge percentage of people won't be able to use it. Lasers on the other hand have a much wider range, and the Tria website has a comprehensive list of hair and skin colors that it will work on.

When it comes to making a good choice nothing quite works for me as a good list of pros and cons, so let's go over some of the main things I have learned about these two machines so you can choose between the Tria vs Kenzzi.

Let's Sum It Up

So what does all of this mean at the end of the day for you? I feel that the question of Tria vs Kenzzi comes down to what your skin will allow you to use than anything else. At the end of the day as long as you use either of these two machines you'll get real results. The Kenzzi is more demanding so that's something to consider if you are short on time, but I can vouch that they both work as they are described.

Of course, there are two key things that I can't overlook, and those are the main drawbacks of each machine. The Tria isn't cheap by any stretch of the imagination. It's a quality machine for sure, but paying double the cost for something that is basically the same as the Kenzzi is a hard pill to swallow. Like I said both of these will work, but the price is one area where they aren't anything alike. Justifying the Tria can be hard unless the IPL just doesn't work for you.

Which of course brings us to the main issue of the Kenzzi, and that's the skin tone limitations. It's a side effect of the way IPL technology works, but the fact that it's not fit for so many skin colors is a real issue. Worst of all it can even cause damage if used, so it's not even a small consideration. if you are concerned about your skin tone it's better not to take the gamble.

So in short, if your skin allows it the Kenzzi Hair Removal Handset is just too good of a deal to pass up. It offers real results, it's easy to use and it's affordable. That's a great package and I can't deny the appeal. But if you have darker skin then the Tria is the only pick. It's unfortunate to see the limitations of the Kenzzi, but they are real. Beauty products should ensure integral health results, so the right hair removal treatment for you should have no drawbacks or side effects. At the end of the day, both are great machines, but as I said it all comes down to the technology they use and its possible effects on you.

Rose Desrosiers
1 year ago  6 min
Want to
Feel Better
Amazing
During Your
Period?

One in every three women will experience pelvic floor issues within their lifetime. Keep pelvic floor muscles fit with Intimina KegelSmart.

Introducing the vFit, the little piece of ingenuity to help us women who crave a more intimate, pleasurable, and comfortable time in the bedroom.

Rose Desrosiers Globus Triathlon Pro: Take Your Training To the Next Level Well-Being

The Globus Triathlon Pro is a sophisticated electro muscle stimulation device that has over four hundred programs to help with your muscle recovery and overall sports rehabilitation.