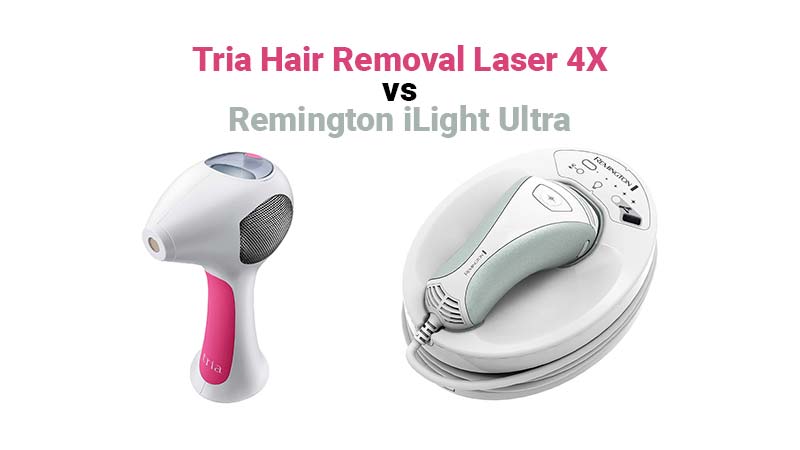 Have you ever thought that there are too many beauty products out there? Don't get me wrong, I love that there's something available for any potential problem I could have. But there are so many products and claims out there that it's hard to know what works or not.

The Tria 4X and Remington iLight  are handheld hair removal devices that reduce hair volume by weakening the hair follicles under your skin. The difference lies in the spectrum of light they employ, which changes the heat level and the recommended skin tones.

Let's take for example the world of hair removal and shaving. Want that perfect hairless look? Well, you can choose between spa laser treatments, spa IPL treatments, state-of-the-art shaving machines, creams, and even special diets. It's impossible to tell what works and what doesn't with how flooded the market is. And the worst part of it all is that I do want to know what are the best hair removal techniques in the market. And I sure you do too, after all, nobody likes those pesky hairs nor shaving.

So I researched a lot online until I managed to pick up the options that stood out the most. This leads me to the world of handheld hair removal devices. The idea is that these little things pack the same technology that spa treatments do. And while they might not be the cheapest in the market, that technological power has to account for something. So today I'll go over the best features of both the Tria Hair Removal Laser 4X and the Remington iLight Ultra Face & Body Hair Removal System.

First, we have Tria's flagship laser device, and those guys sure know how to use a laser. On the other we have the latest Remington device focused on hair removal, and that's also a very trustworthy brand. So today's Tria vs Remington hair removal comparison is bound to be an interesting one.

How Does the Tria 4X Work? 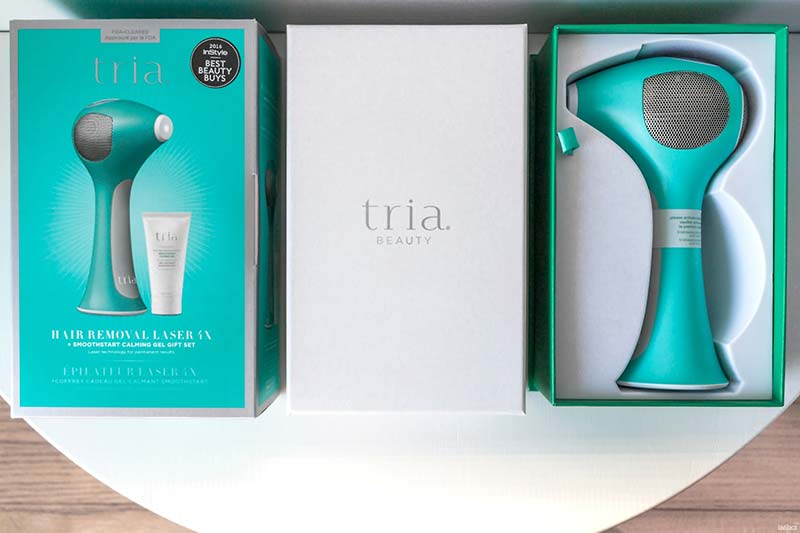 As the name says the Tria 4X is a laser device, which means it uses a light frequency to remove unwanted hairs from your body, but how does that work exactly? Since lasers are light they aren't limited in their range by what's physically in front of them. So for laser treatments the light frequency goes below the skin and targets the root of your hair follicles. Lasers disable the melanin in your follicles functionally "killing" the hair. So existing hairs will wither and new ones will struggle to grow. It nips the problem in the bud and doesn't require any real physical intervention, so it's easy to see why it so popular. The Tria 4X does all of the above, but in a handheld package that allows you to use it at home.

Once you open your Tria 4X you will be face to face with... the bare essentials. The 4X comes in a fancy box, but that doesn't mean there's a lot inside it. You'll get the 4X itself, its manual, and a charger. There's no dock or anything like that, and while the Tria can stand up on its own I would have preferred to see a dock since it is top-heavy.

On the top of the Tria 4X, there's a great display that makes the device easy to use and understand. You have a battery indicator which is always handy, a counter to see how many pulses you've used this session, a level indicator to show the intensity, and the lock symbol. The locking mechanism is really interesting for what it represents. Lasers are still aggressive to a degree, so the lock works as a safety feature. Every time I pick the Tria after a pause or turning it off I need to press the base to my skin and the Tria will unlock if my skin tone is safe for use on laser treatments. It's nice to see a company take these factors into account. And the official site has a very thorough list of skin and hair colors so you can check compatibility for yourself.

Of course, we are here for the treatment process and it is both straightforward and long all at once. The grip is good, maybe slightly big, but it's a solid and comfortable grip. There's only one button on the top as well so setting it up is as easy as it comes. So all you have to do is to press the "nozzle" towards your skin and move as it flashes. The issue here is that the nozzle is tiny. It's amazing for precision areas, but my legs take an eternity to cover. Ideally, the Tria would have interchangeable add-ons, but that's not the case and due to the nozzle size every treatment becomes so long.

Nonetheless, it is easy to see results. Consistency is key, but I began to see less hair on the application areas. Longevity is tied to the battery life, which is meant to last 300 charges. Now of course I haven't used it that much, but doing some math tells me that should amount to 150,00 flashes.

How Does the Remington iLight Ultra Work? 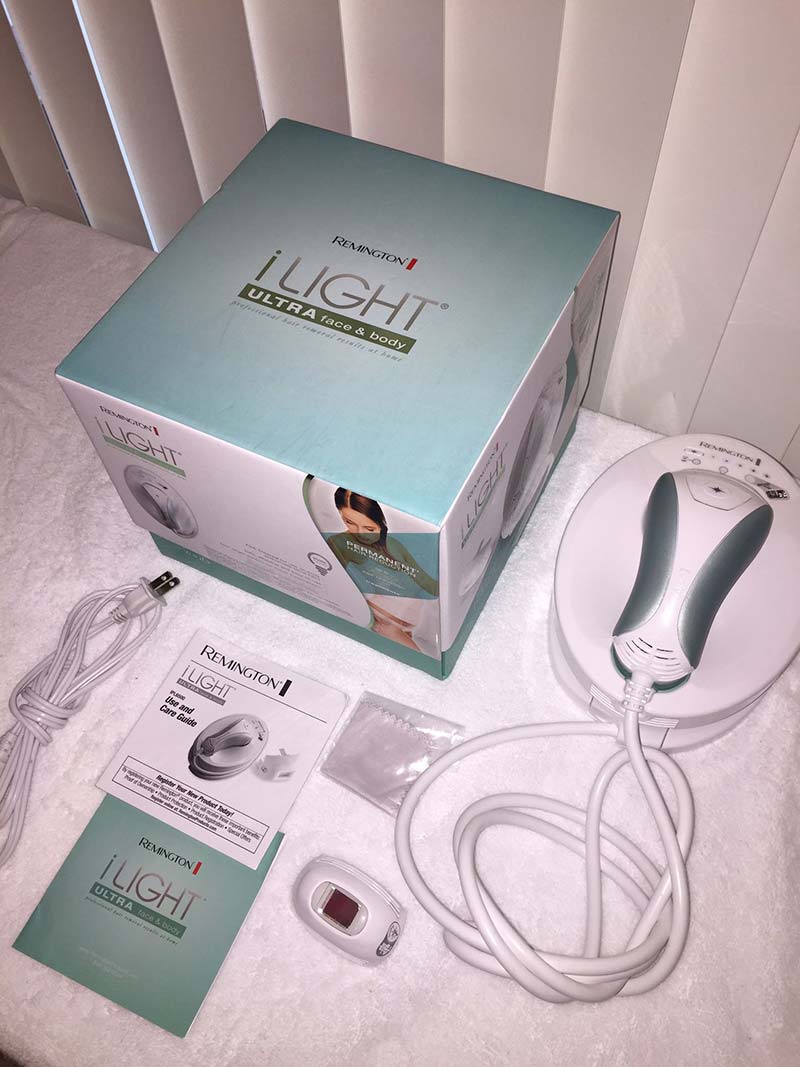 The Remington iLight Ultra on the other hand is an IPL device, which is very similar to laser treatment but not quite the same. It also uses light to target the melanin in hair follicles but some small details do change. IPL has a wider frequency, so you can think of it as a less focused laser. This in theory decreases its impact on your skin. But it also means it ends up targeting a different range of skin and hair colors. We'll go over that a bit more below.

Unboxing the iLight is the complete opposite of the 4X. The box is packed full with the charging base which is almost like a small Roomba in size. I like docks but this does feel a bit excessive. On the base, you'll find the iLight which is smaller than you might imagine. It's not that much larger than a smartphone. You also get a cleaning cloth and an additional cap so you can switch between face and body modes. Thank you so much, Remington. Additionally, the base also counts with its own skin scan as the Tria does, so you also get that extra level of safety with the iLight.

Application is functionally identical; just switch to the right cap and press to your skin. Now the iLight requires you to press manually for each flash, but the button is large and easy to press. The nozzles are also way wider thanks to the interchangeable caps and this means the treatment is so much faster. There's no real trick to using the iLight Ultra and that's perfectly fine. Results become apparent fast as well, and 2 weeks were all I needed to see a change.

Remington claims that the iLight Ultra can last up to 65,00 flashes, which is a considerably smaller number than the alternative. But the iLight Ultra has one key advantage, and that is how many accessories you can buy. You can buy a completely new battery and refill its flash count. And the caps are also sold on their own. This makes long-term maintenance more viable, and that's wonderful.

At the end of the day, there's no clear winner between laser and IPL technology, because their spectrum means they target different users. Laser is meant to be used for dark hairs like black and brown, anything lighter it'll struggle to work with. On the other hand, it works on a wider range of skin tones, and that's a huge plus. IPL however can tackle some lighter hair colors, it won't be able to get rid of them all, but it does have more range. However when it comes to skin it's far more restricted, and IPL can damage darker skins.

So how do the 4X and iLight fare in this spectrum? They aren't as restricted as I assumed at first, but there are still considerations to take into account. They both claim to work on a "Light Brown" skin color, which is roughly number 4 in most of these charts. Similarly, they both claim to handle hair colors up to light brown in lightness. The iLight does mention that the contrast between your skin and hair will play a role, but since it can't be used in dark skins it's not going to get much more range than light brown hair.

So ultimately they both do work, and they are aiming to work on the same ranges. Making this comparison a closer match than I expected.

Let's go over the Pros and Cons of both devices one last time before I go to the conclusion:

The Tria vs Remington hair removal comparison ultimately proves that... They are both great devices that do work. The 4X and iLight are aiming at the same userbase and largely speaking succeed at their task. The key differences lie in the possibilities for maintenance that the iLight offers and the extra safety laser technology can bring. The way I see it if you have very light skin go for the iLight. Being able to replace the battery is of amazing value, and both models are only like $10 apart. However, if your skin is darker I'd go for the Tria. IPL can leave marks on your skin, and no matter how safer the iLight is, that's not a gamble worth taking. But ultimately both work, and having a range of choices is great.

Rose Desrosiers
1 year ago  7 min
Want to
Feel Better
Amazing
During Your
Period?

As the tools that lead the pack in keeping ladies both worry and hair-free, let’s comb down and take a more comparative look as we pit the Tria Hair Removal Laser 4X vs the Philips Lumea IPL 9000 Series.

The Mason Pearson and the Wet Brush are both great options to use on your hair. But what are the main differences?

Our face is the first thing people see of us, so it makes sense that we all want it to look spotless. But I wanted to find a more consistent alternative that had real and undeniable results.

Elite hairbrushes made from quality ingredients are not hard to find, and two of the best hairbrush makers in the world compete for the top spot in Raincry vs Mason Pearson.