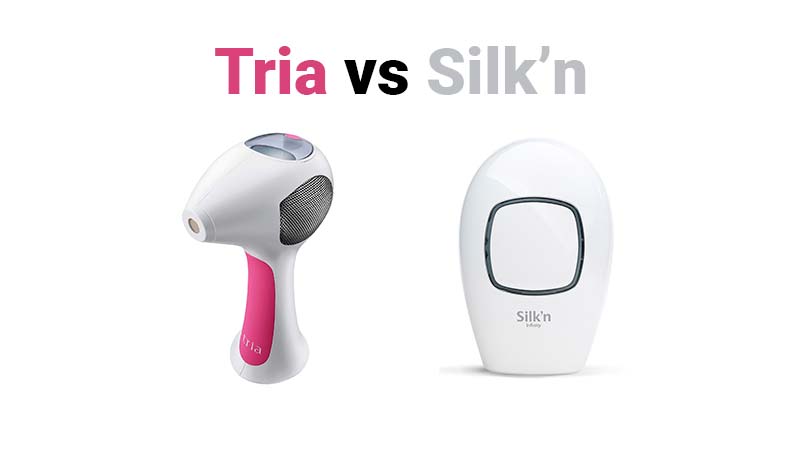 The key difference between the Tria Hair Removal Laser 4X and the Silk'n Infinity Hair Removal Devices comes down to their inner workings. The Tria 4X is a standard laser hair removal device. While the Silk'n operates on the company's exclusive eHPL technology.

Do you know what's the worst part of body hair? That it keeps growing back. I've spent a lot of money on spa treatments to get that perfectly smooth and silky feeling on my skin. But as good as they are they can only last so much before hair begins growing again and it's back to square one,

So I decided to take hair removal into my own hands and look at some home options to have full control over every tiny hair that would otherwise drive me nuts. And today I'll go over two of the most popular hair removal devices in the market: The Tria Hair Removal Laser 4X and the Silk'n Infinity Hair Removal Device.

It's going to be Tria vs Silk'n all over this article as I try to explain every single thing that makes each device unique. But without going into spoiler territory the main difference comes from the technology each one of them uses. The Tria 4X uses laser technology as the name implies, but the Silk'n Infinity opts for a brand new "eHPL" treatment. Will this be enough to beat laser once and for all? Let's take a look at both of them and find out. 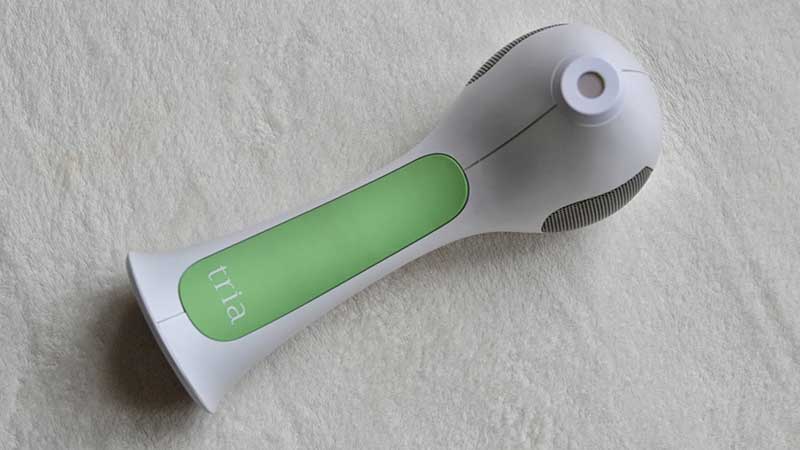 If you have ever researched hair removal devices then the Tria must have been one of the most common results online. And it's for good reason, Tria is an established brand with lots of experience and reputation. Plus the Tria Hair Removal Laser 4X is their most popular product, so that's going to be hard to overcome in this Tria vs Silk'n match.

Ultimately even if it sounds fantastical the Tria 4X is a little handheld laser gun. A laser is ultimately just light, and the Tria 4X uses this light to target the root of your hair follicles and disable their melanin. So in very simple terms, it's a laser gun that targets hair below your skin, and as fantastic as it might sound there is an established scientific principle behind all of it. The 4X is even approved by the FDA so you can rest assured that it does work.

Using the Tria 4X is a snap too. You just need to point the "nozzle" towards your skin and press the main button to start "flashing" your skin. Now, it is a laser so it might smart a little, but it won't leave any marks or scarring. One of the most clever aspects about the Tria 4X is that it will only unlock if it detects your skin color is safe with the device. Their official website has an interactive chart that covers which skin and hair colors work with the device, but this extra level of safety was a welcome surprise.

The Tria Laser packs enough features on its frame to be a worthwhile investment. At the top of the device, you have a display that counts the number of flashes per session and shows you the remaining battery life. However, you can also change the intensity of the laser on your own for extra comfort. Once you find the perfect level for you it won't be changing anytime soon. But being able to choose on your own is always a great boon.

If there's a small issue with the Tria 4X it comes down to its basic design. The gun design is incredibly comfortable to use and hold, so in that sense, I love the shape. But the nozzle is just so small. When applying the Tria 4X you will need to go over large areas, and since the nozzle is so small it becomes a long process. 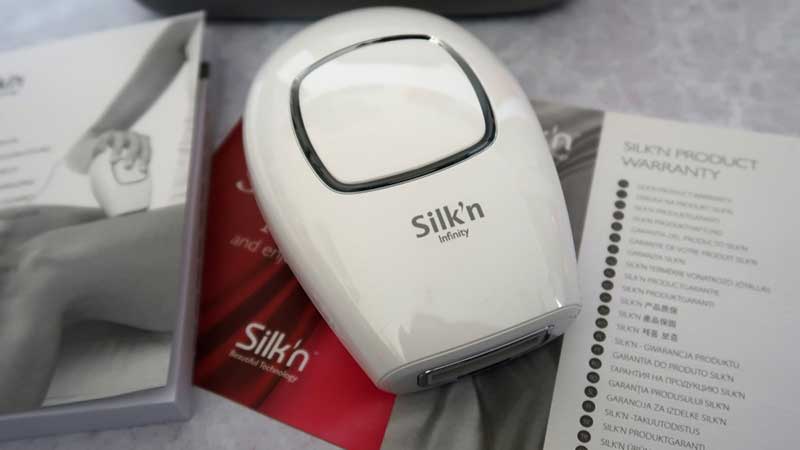 On the other hand, when it comes to the Tria vs Silk'n comparison we have the Silk'n Infinity Hair Removal Device. Brands aside the biggest difference between the two are that the Silk'n Infinity relies on what it calls eHPL technology. I'll go over it in more detail below, but eHPL is a "softer" variant of IPL or Intense Pulsed Light technology. What does this mean for us right now? Not much, as one way or another both of these devices rely on light and direct contact with the skin to remove hairs.

Compared to the 4X the Infinity opts for a completely different design angle. Rather than a gun design, the Infinity has a "bulb" shape. It's rounded and designed to be easily gripped, but it doesn't have a handle per se. There's nothing wrong with this style on its own, but with the Infinity, it was something of a hassle. The Infinity is in all honesty rather bulky, so it can be an awkward grab for certain positions and areas. It's just not as practical as the 4X at face value.

On the other hand, one huge boon to this design is that the application area or "nozzle" as I keep saying is much broader. After the Tria, this felt like a huge lifesaver and it made the process so much faster and easier. The application itself is functionally the same, power on, wait for a flash to get applied, and move to the next patch of skin. As I mentioned the Silk'n allowed me to finish sessions faster, but it was also overall much softer on my skin. IPL is barely noticeable, but this went a step beyond and made me question if it even was on. There are 5 power settings all in all, but you might want to stick with the highest one.

Last but not least the Infinity has an accompanying app so you can easily schedule your sessions and get reminded of them. Does it change how the device works? Not really. Is it super comfy? You bet! It's a real nice Quality of Life feature that I appreciate a lot.

What Even Is eHPL? Is It Better Than Laser?

Now the real difference between the Tria vs Silk'n lies in the fact that one relies on laser technology and the other on eHPL. We covered the basics behind laser technology already, and we know it works as intended. But what exactly is eHPL?

eHPL is a Silk'n trademarked variant of IPL. As we mentioned IPL uses a different principle but still relies on light so the experience will almost be the same as lasers. Traditionally the biggest difference between laser and IPL devices is the effectivity on different skin colors and hair colors. Lasers work best on dark hairs, and by comparison, are less picky when it comes to skin colors. IPL devices on the other hand work on a much broader selection of hair colors but can be rather aggressive on darker skin colors.

eHPL attempts to be something of a middle point, with the wide range of hair colors IPL offers but without the drawbacks. The details of what is going on can be longwinded and geeky, but basically, a combination of traditional IPL components and a specialized electrode ensures the Infinity works differently than traditional IPL devices. Hence the eHPL moniker.

That said I find the claims a little questionable. The general idea is that eHPL is much softer on your skin, hence making it safer for a broader range of skins. The packaging brings attention to this too, but it's hard to be 100% convinced. It's softer, almost too soft. I mentioned that the highest setting is the best before, and that's because otherwise, you will barely notice the device. Which brings us to my main concern, if I have to raise the intensity as high as possible... won't it be risky for darker skins once again?

I'm sure you must still have some doubts about what is the right device for you. So let's go over some key pros and cons for each device so you too can reach a conclusion at home.

Let's Sum It Up

The Tria vs Silk'n comparison turned out to be much more challenging to sum up than I expected. When it comes to basic usage they are very similar. Point at your skin, flash and continue. They both have minor design drawbacks that can make the process slightly annoying, but I wouldn't call it a deal-breaker by any stretch.

When it comes to the price the Tria is more expensive, but it's not by a huge amount either. They are basically $100 apart. This is a considerable amount, but it's still a reasonable enough gap to sincerely consider each device.

Ultimately it comes down to the technology behind each device, and that's where the Silk'n starts to become questionable. Tria is an established brand, laser technology is known to work, and the 4X is even FDA approved. All of that is more than enough to sell me on the Tria. But it0s a very different story for the Silk'n.

eHPL is at its core IPL, but a rather weird take on it. It's designed to be much softer so it can work on a wider range of skin tones. But as it currently stands the settings are so low that it's a real struggle to get actual results with it. And since at the end of the day it still is IPL I'm not sure I trust it for darker skins. Overall while the promises the Silk'n Infinity offers are really interesting, the Tria 4X has real data and results behind it. And that simply makes it the better pick.

Rose Desrosiers
1 year ago  7 min
Want to
Feel Better
Amazing
During Your
Period?

Elite hairbrushes made from quality ingredients are not hard to find, and two of the best hairbrush makers in the world compete for the top spot in Raincry vs Mason Pearson.

Rose Desrosiers Globus Triathlon Pro: Take Your Training To the Next Level Well-Being

The Globus Triathlon Pro is a sophisticated electro muscle stimulation device that has over four hundred programs to help with your muscle recovery and overall sports rehabilitation.